So, I Facebook.  Many people do.  But there are many people who don’t.  They think Facebook—that putting your entire life online for the edification of others—is a completely crazy thing to do.  Maybe it is.  I don’t know.  But many other people (and some of the SAME people who think Facebook is crazy) also think that the act of creativity is crazy.  And sometimes, it is.  Sometimes I’m up all night with ideas that are positively foaming over in my brain faster than I can write them down.  Sometimes I’m incredibly depressed that there ARE no ideas.  Sometimes I ask my husband to bring strange things home from work, like clothes that will fit my cat. 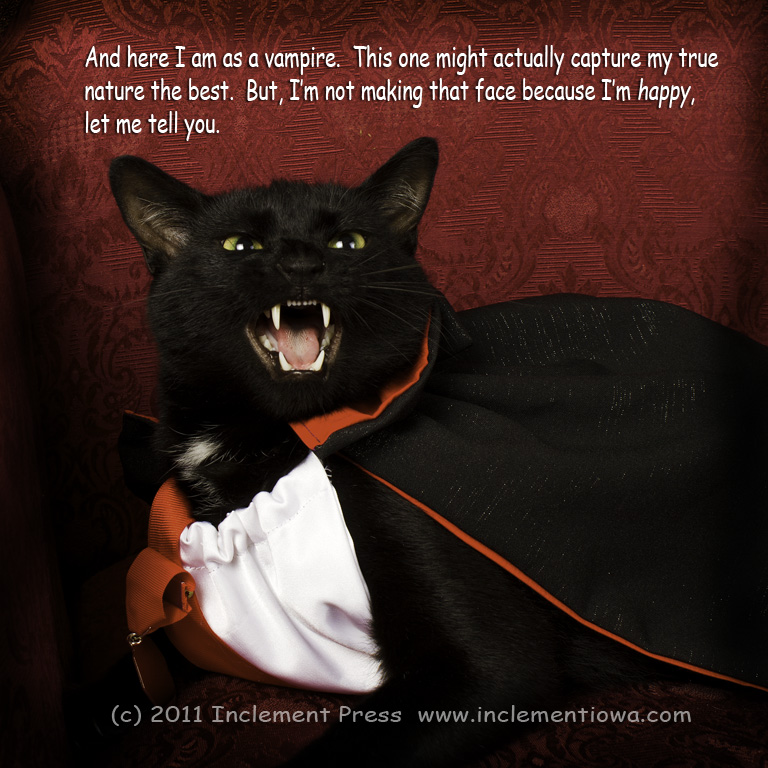 And he actually BUYS these things. Now THAT’S crazy.

Sometimes I get so involved in whatever I’m creating that I make messes in the house, drink juice straight from the carton, forget to eat and sleep, and have to be told that it’s time to shower.  And that’s just WHILE I’m creating.  After I finish whatever project it is, I have to “get it out there”, which involves being open to criticism, and praise, or, worse than either one, just being ignored and disregarded.  Being successful at creative pursuits means you have to share it, and wait for the response, which makes you scared and happy and proud and depressed and all sorts of things that, depending upon their intensity, make you crazy.  Plus, a lot of people think that allowing yourself to be that vulnerable, well, that’s crazy too.  So, I’m crazy, Facebook is crazy…it all works for me.

And the reason I’m “on” about this today, is that I’m beginning a small “thing” on Facebook.  I already use it for promoting my blog, and my photography business.  I use it for a few personal, family things as well.  But it is mostly for business.  However, I’ve decided that that stupid “status update bar” needs to be filled with something more than what I had for supper, or how my husband’s toenail fungus is really disgusting (it is).  I’m putting some actual WRITING in there.  Not necessarily every day.  And not about ANYTHING specifically.  Just about some experience I had, or idea or concept that became clear to me.  See, I can be notoriously thick.  In fact, I feel that much of my days are spent saying “Wha?” as I walk around in my own little mental world.  But suddenly, and with no warning, my brain light bulb will activate, all 15 watts or so, and I will “get” something.  Or I will experience something with new eyes.  So, I’m trying to record those fleeting moments because I think, somehow, that is where the true gold of my creative life really lies, and I record them, at least in part, on Facebook.

I took the dog out into a cold, gray morning, bare branches above and dull ground underfoot. We go to the same corner of the yard each time, and while she does her business, I always survey the parts of the property that I can see. (Not that we have an estate or anything–we have a modest home on a modest lot, no biggie.) For some reason, as I was looking at two evergreen trees in the backyard, I spied a small “sparkle” through the branches, just for a moment, but bright. I’m sure it was caused by a streetlight shining through the boughs from a block over or something, but it didn’t really matter, because, instantly, I was transported. It was, for a brief but interminable moment, as if I was in the yard during a full-on June evening, with the warm sun just gone under the western horizon, the grass thick under my feet, and the air alive with bugs everywhere. The whole world positively seethed with life, and the sparkle through the tree branches that I had spied back in March was just one of about a million other sparkles from lightning bugs doing their mating dance in the muggy Iowa night. I stood there, in the summer-that-wasn’t and breathed in all the life that was-soon-to-be, and it was wonderful.

I love all seasons. I can find beauty in every single time, something to appreciate, something to enjoy, and it is one of my few really great qualities in my large collection of rather human ones. Winter makes me feel like I’m resting, giving my brain a break from all the riotous color and activity of the other seasons. For me, it is a necessary balance. But, I’m ready now, for flowers peeping and mown grass and lightening bugs calling busily through the purples of summer evenings.

Then, the dog gave a tug on her leash, and I was rushed back to Iowa, March 2013. The clouds hung low and unremarkable. We headed back inside.

Now, this isn’t Salinger or Hemmingway or Stephen King (I WISH it was Stephen King!), but it is me, and it is completely what happened to me this morning when the dog was doing her “thang” on my hard-as-winter-bones yard. 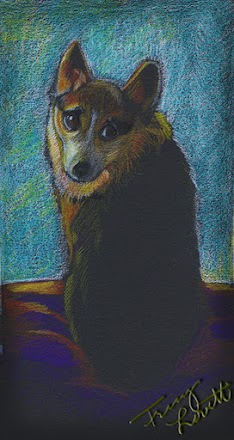 Not terrible.  And it felt good to write.  So, there it is.

I’m under no illusions that I will elevate Facebook, or get rid of the Harlem Shake memes, or the sometimes awful political bickering that goes on there.  I’m just going to reach out to people with me, and who I am.  That’s it.  And really, that is ALL art.

Facebook is a great place to get your work in front of people.  It is maybe NOT a great way to actually gauge how good your work is (depending upon who reads it), but it is super for just “getting it out there”.  So, whether you are an adult or a kid or a kid-like adult, just put it out there, and be human with others.  And if someone else puts a bit of themselves out there, read it, look at it, appreciate it, knowing it is maybe a very important part of that person.